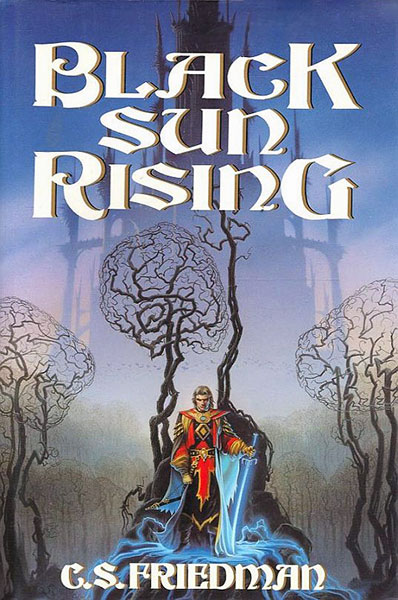 Twelve centuries after fate first stranded the colonists on Erna, mankind has achieved an uneasy stalemate, and human sorcerers manipulate the fae for their own profit, little realizing that demonic forces which feed upon such efforts are rapidly gaining in strength.  Now, as the hordes of the dark fae multiply, four people are about to be drawn inexorably together for a mission which will force them to confront an evil beyond their imagining, in a conflict which will put not only their own lives but the very fate of humankind in jeopardy.

The Priest: Damien Vryce–a rebel, a warrior, one of the few men of his calling who believes that sorcery can, indeed, serve as a potent weapon in the war against evil, a man ready to sacrifice anything and everything in the name of human progress…

The Adept: Ciani of Faraday–one of the few humans born with the ability to see the fae and to alter it, she has devoted her life to the acquisition of knowledge.  But a deadly evil from her mysterious past has marked her for vengeance, and its devastating assault leaves her no choice but to track down and destroy the demons who have robbed her of her lifelong powers and most of her memories…

The Apprentice: Senzei Reesse–Ciani’s friend and assistant, he has lived in the shadow of her power for many years, hungering to possess the adept’s talents which he knows can never be his…

The Sorcerer: Gerald Tarrant–an enigmatic figure of seductive elegance and chilling amorality, he draws his strength from a land immersed in perpetual darkness, and serves an evil will so powerful that it can alter the very balance between life and death…

Now a menace which even Tarrant has come to dread has invaded the human lands, and Ciani is only the first of its victims.  Only the combined efforts of this uneasily allied foursome offers the least hope of finding and combating this ruthless, soul-devouring darkness.  And so, with no other choice open to them, their journey begins…

Booklist
“This tale definitely straddles the border between fantasy and sf, appealing to readers of both in the manner of Bradley’s chronicles of Darkover or McCaffrey’s of Pern…well-chosen detail continues to bring her worlds and characters to life quite well. So her latest is for anyone who cares for its kind of quest-romance.”
Library Journal
“Friedman has produced a splendid hybrid of sf and fantasy in this first volume of a trilogy. Hauntingly memorable protagonists, high drama, and vivid world-building mark the beginning of what promises to be a magnum opus of the imagination. A priority purchase for fantasy or sf collections.”
Locus
“Friedman has always been notable for the complex quirky detail work that makes her worlds fascinatingly memorable places to visit, and this is no exception. The style is lyric and fanciful, with arresting imagery…classic high fantasy.”
Locus
“Stunning…combines good historical world-building, vampires, religion, and transcendance in a tale that is both entertaining and carthartic…A feast for those who like their fantasies dark, and as emotionally heady as a rich, red wine.”
Science Fiction Review
“This book is a work of great power…some of the best writing I have seen in quite a while, and the ending is excellent. Very highly recommended.”
Midwest Book Review
“Friedman’s powerful drama is easily absorbed-and hard to put down.”